THE SEVEN WORST HALLOWEEN TREATS FOR YOUR KIDS 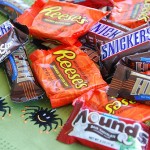 Women’s Day Magazine has put together a list of the most unhealthy Halloween candies for kids. All of them are either high in calories, bad for their teeth, or BOTH.

However, you should note that it’s also basically a list of the most deliciousHalloween candies. So it’s probably the stuff YOU eat when you pick through the candy they bring home.

#1.) Snickers. The main reason they’re bad is the caramel, which gets stuck in their teeth and causes cavities. That’s one reason 3 Musketeers are a better choice. Plus, they have fewer calories. Skittles also tend to stick to teeth and cause more cavities than other types of candy.

#3.) Candy Corn. It’s worse than most other types of candy, because it’s nothing but sugar, artificial coloring, and artificial flavors. At least things like Snickers and Peanut Butter Pumpkins have peanuts or peanut butter in them, which means they have SOME protein. But candy corn is just 100% bad for you.

#4.) Tootsie Pops. Actually, ANY kind of lollipop is bad for your kid’s teeth, simply because they take so long to eat. Most types of candy only stay in your mouth for a few seconds. But lollipops can take five or ten minutes to finish. On the flip side, that can also be a GOOD thing because it prevents them from just shoveling candy bar after candy bar into their mouth.

#5.) Starburst. Each piece is about 15 calories, which isn’t that bad. But they’re loaded with fat and sugar. In fact, ten Starbursts have about the same amount of sugar as five-and-a-half sugar packets. Plus, just like caramel, they tend to stick to your teeth longer than other types of candy.

#6.) Sour Patch Kids. Again, they stick to your teeth and cause cavities. But they also have high levels of acid in them, which breaks down your enamel and causes even MORE cavities.

#7.) Fun Dip. If you don’t remember, it’s basically a hard white stick of sugar that you dip into MORE sugar. So it’s pretty obvious why it’s bad for you. One serving has 50 calories, and sometimes one package has three servings in it.